B.C.'s labour force increased slightly in 2021 despite the lingering impacts of the COVID-19 pandemic. By the end of 2021, recovery for most industries was strong. Indeed, employment across the province increased by 2.1% from February 2020 to December 2021. As the province begins a transition away from public health restrictions aimed at limiting the spread of the virus, British Columbia is forecast to experience robust GDP growth in the short term.

B.C.'s diversified economy helped cushion the Province from the negative impacts that the global pandemic had on international trade. Nevertheless, the pandemic crippled global supply chains and B.C.'s exports declined by roughly 8.3% in 2020. Exports from B.C. rebounded in 2021 as the province's international merchandise exports increased 34%. Improvements to the province's trade balance are largely attributed to an increase in the value of energy product exports, namely coal and natural gas. Meanwhile, Canada's trade relations with the U.S. improved somewhat as the U.S. announced a reduction of countervailing and anti-dumping duty rates on Canadian softwood. The new rates will be set at 11.6% for the majority of Canadian producers, down from the previous rate of 17.9%.

The impacts from COVID-19 on B.C.'s labour market continued into 2021, and many British Columbians remain unemployed due to the uncertainty the pandemic has created in some industries. Nonetheless, B.C.'s unemployment rate improved 1.8 pp from 2020 levels, achieving 6.5% in 2021.

Indeed, employment in most industries recovered as vaccinations increased and provincial regulations eased by the fall of 2021. Nevertheless, the province's participation rate has yet to return to pre-pandemic levels, down -0.7 pp in 2021. 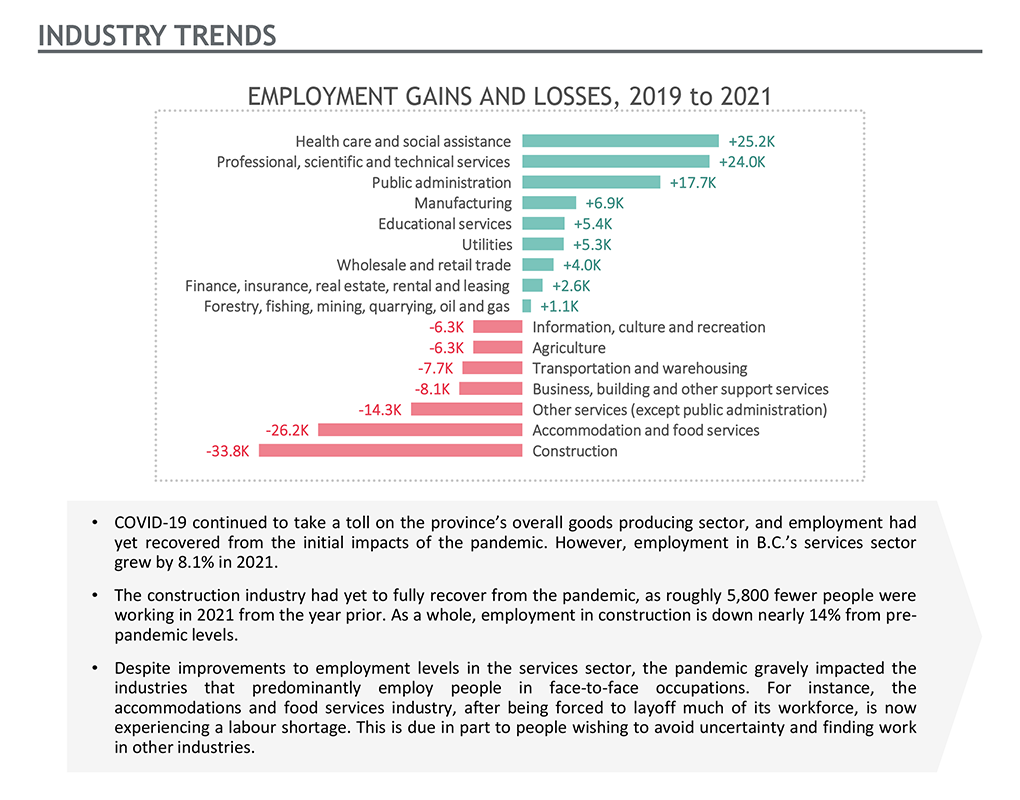 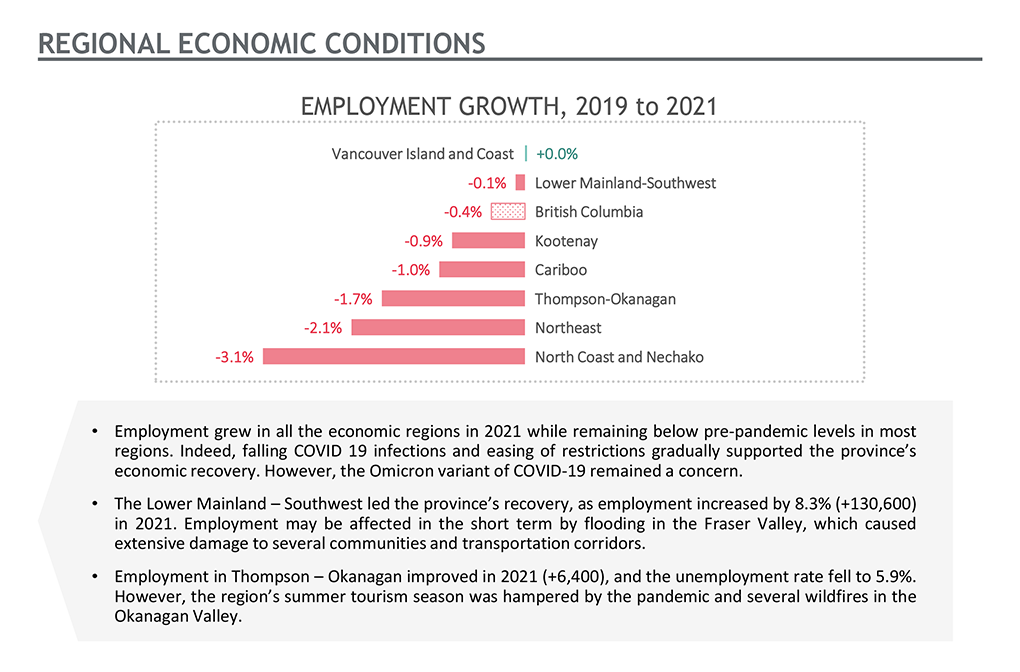 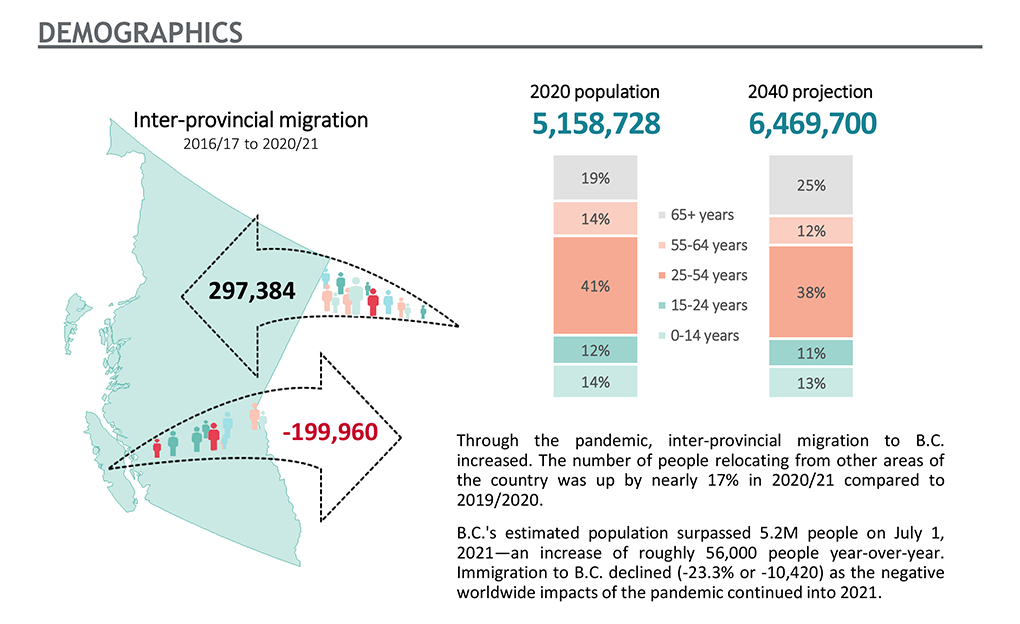 Through the pandemic, inter-provincial migration to B.C. increased. The number of people relocating from other areas of the country was up by nearly 17% in 2020/21 compared to 2019/2020. 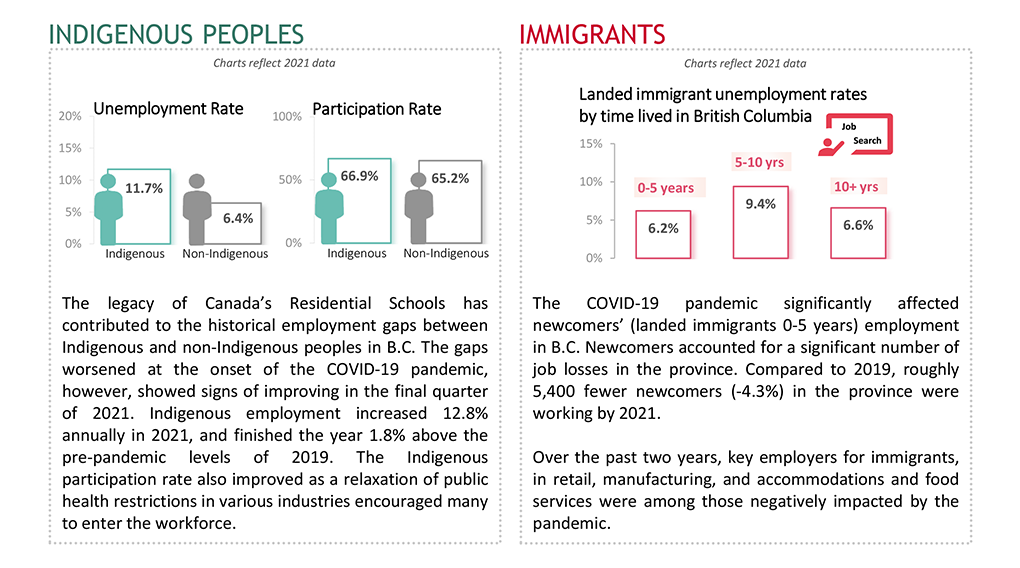 The legacy of Canada's Residential Schools has contributed to the historical employment gaps between Indigenous and non-Indigenous peoples in B.C. The gaps worsened at the onset of the COVID-19 pandemic, however, showed signs of improving in the final quarter of 2021. Indigenous employment increased 12.8% annually in 2021, and finished the year 1.8% above the pre-pandemic levels of 2019. The Indigenous participation rate also improved as a relaxation of public health restrictions in various industries encouraged many to enter the workforce.

The COVID-19 pandemic significantly affected newcomers' (landed immigrants 0-5 years) employment in B.C. Newcomers accounted for a significant number of job losses in the province. Compared to 2019, roughly 5,400 fewer newcomers (-4.3%) in the province were working by 2021.

Over the past two years, key employers for immigrants, in retail, manufacturing, and accommodations and food services were among those negatively impacted by the pandemic. 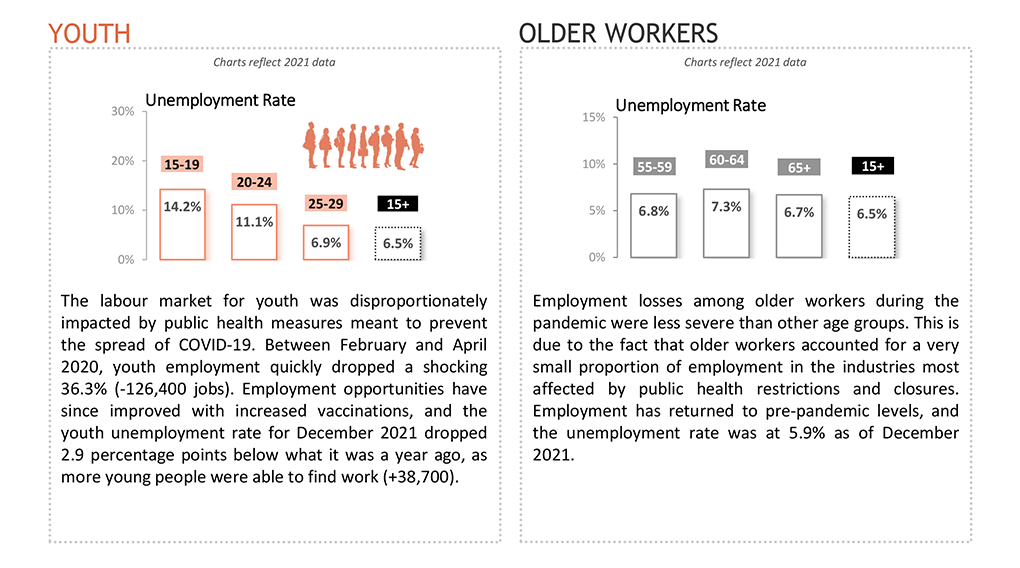 The labour market for youth was disproportionately impacted by public health measures meant to prevent the spread of COVID-19. Between February and April 2020, youth employment quickly dropped a shocking 36.3% (-126,400 jobs). Employment opportunities have since improved with increased vaccinations, and the youth unemployment rate for December 2021 dropped 2.9 percentage points below what it was a year ago, as more young people were able to find work (+38,700).

Employment losses among older workers during the pandemic were less severe than other age groups. This is due to the fact that older workers accounted for a very small proportion of employment in the industries most affected by public health restrictions and closures. Employment has returned to pre-pandemic levels, and the unemployment rate was at 5.9% as of December 2021. 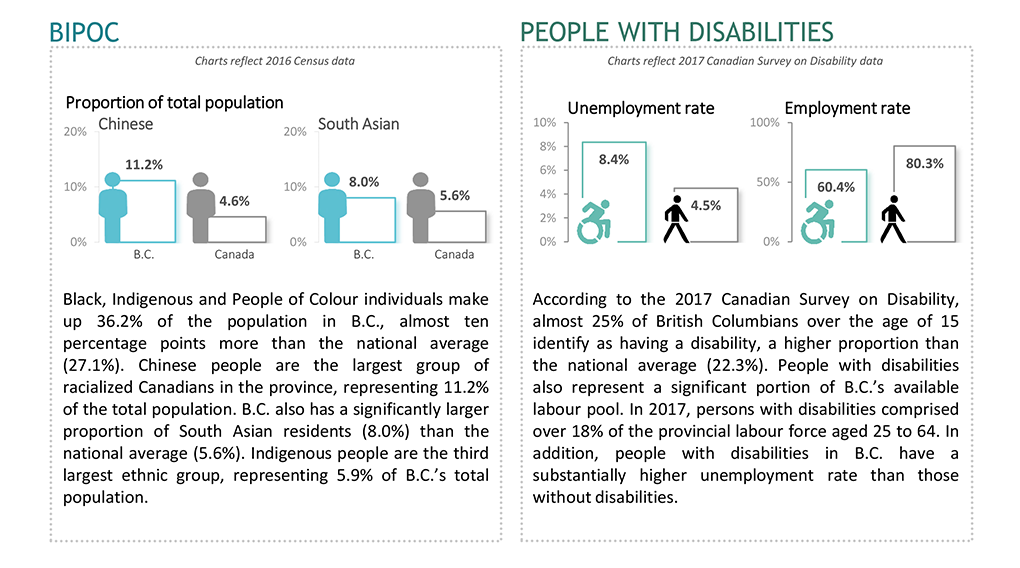 Black, Indigenous and People of Colour individuals make up 36.2% of the population in B.C., almost ten percentage points more than the national average (27.1%). Chinese people are the largest group of racialized Canadians in the province, representing 11.2% of the total population. B.C. also has a significantly larger proportion of South Asian residents (8.0%) than the national average (5.6%). Indigenous people are the third largest ethnic group, representing 5.9% of B.C.'s total population.

Report a problem or mistake on this page